IPL 2017 has been quite a surprise with teams like Royal Challengers Bangalore having a very topsy-turvy tournament while Mumbai Indians seems like playing as a unit. This post shows the mid-season number and analysis. 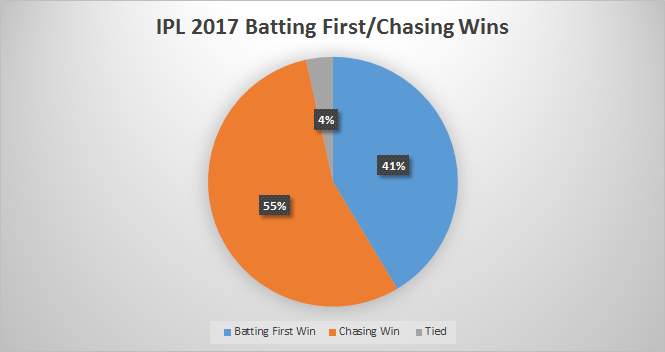 The teams seems to favour batting first and believe defending is possible with a good bowling line-up.

However this might change in the later half with some of the teams known to mount a comeback especially with their batting. Mumbai Indian have been the most consistent with 6 wins out of the 8 matches played.  Thanks to an excellent of Pollard, Pandya brothers, Jos Butler, Malinga they seem to have covered it all, be it batting, bowling or fielding.

Their only nemesis seems to Rising Pune Supergiants with Mumbai losing both their encounters with them. However the was MI are cosnsitently performing they should be  in the top 4 in teh second half as well.

Kolkata haiving won 3 of their last 4 matches seems to be getting in some groove. Backed by good bowling attack in the form of Chris Woakes, Umesh Yadav, Sunil Narine and with pinch hitters like Chris Lynn, Manish Pandey and the experienced Gambir and Uthappa they should be in the top 4 easily at the end of the league matches.

Kolkata Knight Riders are the 2012 and 2014 champion, so it might be just time for them to make a run for this IPL 2017 Championship.

IndiaLeagues prediction is Mumbai Indians reaching the finals with an unlikely and unpredicatable team as the opposition (maybe Rising Pune Supergiants or Royal Challenger Bangalore).

RCB is the only team with the top score (219 runs) and also the lowest score (49 runs) in this edition of the IPL.