Have you ever wondered why squash players ‘boast’ about their shots, after all it’s a game. Then it dawns upon you (actually explained by a squash professional) that ‘boast’ is actually a type of shot in squash. The following guide is refresher for anybody wanting to pick up this game or trying to understand the different shots of Squash.

All the shots are examples of right-hand players (for left-handed just reverse the directions).

Forehand Drive – The forehand drive is the most fundamental shot of squash and it’s a shot that after hitting the front wall the ball goes parallel to the side wall to a good length so that the ball dies on its second bounce near the back wall.

The idea is to get the ball as parallel to the side wall as possible so that the opponent has to leave the crucial ‘T’ zone.

Position – The body and shoulders should be parallel to the side wall, and the ball should be at the top of the bounce and at a comfortable distance opposite the left knee. The arm should straight while hitting the ball and follow through should be in the direction of the ball.

The backhand drive is similar to the forehand drive except it’s done on the backhand side of the wall (left side). This is relatively harder to accomplish especially for beginners as it’s hit off the right foot and the hand position and follow through become very important.

The cross-court drive is shot that is hit to the front wall and after rebound it goes across and hits the further side wall on the other side just after the service box. The cross-court is similar to forehand drive in terms of swing but the body position is slightly different.

Position – the body position is slightly aligned to the center rather than being parallel to the side wall. The shot has to be wide enough to prevent the opponent from volleying it and to try and make the ball die in the back court area on the other side.

The boast is a shot whereby you use the side wall or the back wall before hitting the front wall. The ball after the front wall drops short and opens up the front half of the court. The boast can be used as an attacking shot or a defensive shot. The different types of boasts are:

While playing a boast, it is important to have the knees bent and hit through the ball with a slightly open-faced racquet.

Attacking Boast – The attacking boast is played when you are in front of your opponent. The ideal shot would be get the ball to hit the middle of the front wall and bounce twice before hitting the side wall. Ideally the second bounce should be just before the side-wall/floor nick. This shot forces your opponent to run the full diagonal while you take one step back to the ‘T’.

Defensive Boast – This shot is hit when you are behind your opponent. In this shot the aim should be to hit the opposite corner floor – side wall nick. This is referred to as a 3-wall shot and has to be used at the appropriate time.

The common mistake done by beginners is to either go too close to the ball (cramped shot) or try to lift the ball instead of going through with the shot. History of Squash in India 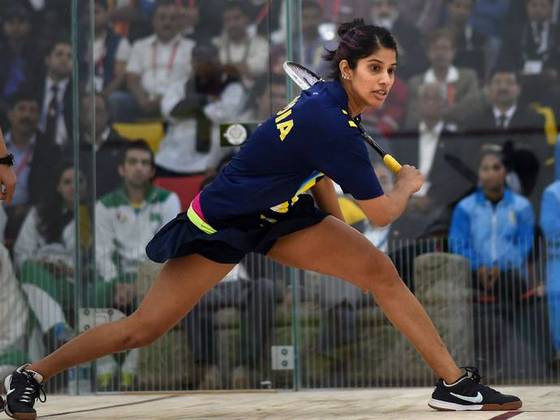 A volley is a shot that is taken in the air before the ball bounces on the floor. It is an attacking shot and a useful shot to have in your arsenal. The volley can be used in conjunction with other shots and can be used in a variety of ways:

The volley is a very effective shot as it helps to control your opponent and also less running from your end.

It is not an easy shot as it requires a lot of control and above all a positive mindset while playing this.

Position – in terms of posture, the body faces the sidewall and weight is on the back foot and weight should be transferred to the front foot with the swing (punch). The backswing is reduced, wrists are cocked and racquet head up .

Along with a Drop, the Volley is the best way to finish off a rally.

The lob is a shot that is played high onto the front wall such that it rebounds in a loopy fashion along the length of the court to land close to the other side back wall (cross lob). The lob can be both used an attacking shot or a defensive shot. There are two lobs essentially:

Position – the body faces the front wall – side wall corner and should be in line with the direction where you want the ball to go. The backswing should be the same as drive and arm and forearm move under the ball so that the ball is played high onto the front wall with a lifting motion.

In a cross court lob, the most important part is to avoid interception by the opponent to make a volley – the lob should be high enough to prevent this and hit the side wall somewhere after the service box.

The lob can also be used to slow down the tempo of the game.

Position – For a correct execution ,the body should be side on with the shoulders pointing in the direction you want the ball to go, knees bend, wrist cocked, racquet head up. The ball is played in front of the leading foot with a slightly open racquet face.

Drop shot should hit the front wall first and then bounce as close to the side wall as possible.

To become a better squash player, apart from understanding the shots of squash, it is very important to known when the shots are to be played (this actually is the crux of the entire sport and actually comes with experience and maturity).

Hopefully this article gives you enough information to try and practice your own shots. Do have a look at Racquet Buying Guide or Squash Balls guide before taking on Squash.